Register for more free articles. Sign up for our newsletter to keep reading.

Receive the latest in local entertainment news in your inbox weekly!

Back to homepage
Subscriber Login
Please subscribe to keep reading. You can cancel at any time.
Loading&hellp
You are the owner of this article.
Edit Article Add New Article
You have permission to edit this article.
Edit

See which seven shows are part of the 2022-23 Broadway season at the Steven Tanger Center for the Performing Arts in Greensboro.

GREENSBORO — Mayor Nancy Vaughan remembers tears in her eyes as she watched city native and Grammy Award-winning musician Rhiannon Giddens perform on opening night of the Steven Tanger Center for the Performing Arts.

"It was absolutely amazing: the sightlines, the comfort, the sound system," Vaughan said of the Tanger Center. "It is unparalleled."

Vaughan spoke at a Tuesday luncheon of Tanger Center planners and supporters celebrating its first year and looking to its future at the downtown venue at 300 N. Elm St.

Although it's been open little more than a year, the venue already has welcomed more than 431,000 patrons, 221 events and performances along with 89 sold-out shows, said Matt Brown, managing director of the Greensboro Coliseum complex, who oversees the Tanger Center.

It's also hosted a record-setting inaugural Broadway season for 17,414 season ticketholders, an industry record for a new venue, Brown said.

The $94 million Tanger Center — the result of a public-private partnership — opened on Sept. 2, 2021, with Giddens' performance. Opening had been set for March 2020, but the COVID-19 pandemic postponed that by 531 days.

The inaugural Broadway season featured such hit shows as “Wicked” and “Disney’s The Lion King” as well as a special three-week special engagement of the blockbuster “Hamilton" that was not part of the Broadway series.

“Wicked,” the first Broadway touring production to play at the Tanger Center, drew capacity crowds of more than 66,000 for its 24-performance run through most of last October, Tanger Center officials have said.

The production also generated an economic benefit of nearly $12 million to the city from travel, hotels, restaurants, parking and other businesses patronized by both theatergoers and production staff, based on a Touring Broadway League report.

The report found that, on average, Broadway tours contribute an economic impact of 3.27 times the gross ticket sales to the local metropolitan area’s economy.

Ten more restaurants plan to come downtown. "We really need that, because it is hard to get a reservation when there is a Tanger performance in town," Vaughan said.

It will feature seven shows, up from six this season.

"Being able to see Broadway shows in our downtown is fantastic," Vestal said.

The event previewed the 2022-23 season that will launch with "Pretty Woman: The Musical." It will hit the Tanger Center stage for eight performances, Oct. 25-30.

Look for a season that also includes "Jagged Little Pill," "Cats," "The Book of Mormon," "Ain’t Too Proud — The Life and Times of The Temptations," "Beetlejuice" and "Disney's Frozen."

As of Tuesday morning, Tanger Center had sold 16,000 subscriptions for the 2022-23 season, Brown said in an interview.

Although it will continue selling them until the start of "Pretty Woman," Brown said he doesn't expect season subscription sales to reach the inaugural season's 17,414.

"By getting to 16,000, I think it puts us in a position to potentially grow even stronger next year," he said.

Vaughan thanked the crowd for its support.

"And there is more to come," she said.

Behind the music: Meet the 'village' bringing Mary J. Blige to Greensboro

Which Broadway shows are coming to Greensboro in 2022-23?

Go to tangercenter.com/broadway to buy tickets to the 2022-23 Broadway season at the Tanger Center.

Receive the latest in local entertainment news in your inbox weekly!

Related to this story

See which seven shows are part of the 2022-23 Broadway season at the Steven Tanger Center for the Performing Arts in Greensboro. 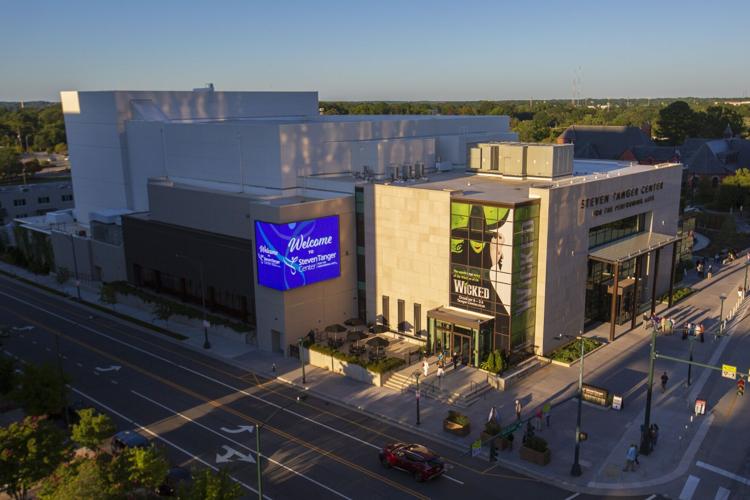 The Steven Tanger Center for the Performing Arts celebrated its first year and looked to its future with a luncheon on Tuesday.

Tayler Harris plays Grizabella in "Cats." It is one of seven shows that make up Tanger Center's sophomore Broadway season.

Get up-to-the-minute news sent straight to your device.